Posted on December 29, 2010 by madamescientist

What do you get with a mix of Mexican, Indian and Russian? A great evening. Today, I invited my friend Svetlana and her husband Michael for a holiday meal. Svetlana is a colleague, originally from Moscow, and the world’s expert on all things copper. This includes, copper transporters (ATP7A, ATP7B), copper diseases (Menkes and Wilsons) and copper biology. Having played no small part in luring her to Hopkins from Oregon, I’ve barely had the time or opportunity to enjoy her company. Besides, this gives me another excuse to indulge my penchant for culinary incursions into Mexican food.

Have you heard my favorite anecdote about Mexican cooking? Years ago, as an impecunious postdoctoral fellow, I was part of a vast Indian workforce in New Haven that plied the labs at Yale like so much grist to mill. They were a cheerful bunch, getting together on weekends with boisterous potluck dinners that fed 40 or more. On weekdays, the men would put in long days, a quick dinner at home, then back to work for even longer nights. Their wives were educated, charming and smart.. they went home to cook and didn’t get back to lab after dinner. That memo missed me, but no matter, for the lovely Indian ladies warmly included me in their fabulous parties but always insisted that I bring raita (sort of a yogurt dip), which as you must know is the simplest item on any menu. My husband was vastly amused by this, pointing out the obvious assumption that I couldn’t cook. Many raitas later, I finally worked up the courage to reciprocate, offering a smallish cohort of my countrymen a home cooked dinner. I didn’t have the nerve to serve them palak paneer, or chole batura or even rasmalai and so I hit upon the idea of a Mexican menu. Mexican food shares many of the flavors and herbs of Indian cuisine..cumin and cilantro, chilli peppers and beans, for example, and by boldly going where none of my compatriots had gone before, I could cleverly circumvent any potential comparisons of culinary superiority. I took this assignment seriously..for weeks, I pored over Mexican cookbooks checked out from the library, test drove recipes and sought out the local Spanish markets for hard to find ingredients (achiote, anyone?). Authenticity was my goal. Dinner arrived, and I did not disappoint. My Indian friends dug in with obvious delight, approving smiles all around. Whew, I passed muster! Just before leaving, the most senior fellow of them all bestowed the ultimate compliment… they didn’t generally care for Mexican food, he explained, but they loved my version because it tasted “just like Indian food”!!

Through the years, I have persevered to forget and forgive (although my “Mexican” food still tastes Indian!). Tonight’s experiments included:

Assorted other stuff, like Baba Ghanouj as a dip for the tortilla chips (yes, I know it’s not Mexican, but I had two big eggplants), salsa and of course Mexican “raita” or sour cream. Dessert was store bought vanilla bean ice cream scooped over a warmed puddle of wild blueberry preserves (Anjana’s idea!), topped with a scattering of fresh blueberries and a homemade nankatai cookie.

Black Bean Soup…thanks to Google. Discard top ranking recipe which has bacon as the main ingredient-from Food Network (Motto: “Watch us add bacon or pancetta to anything”). Discard the one that suggests you mix a can of salsa with a can of black beans (hey, any one can have a cooking blog these days). The one below is from TGI Friday’s. 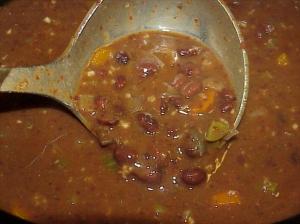 Stuffed Poblano Peppers…..Poblano peppers are dark green, thin skinned and have an amazing flavor. They can be somewhat hot at times, otherwise mild..I find this varies from batch to batch. If you are feeding people who cannot deal with this, use ordinary green bell peppers/capsicums.

Cumin flavored Rice: This is so easy that it does not deserve an itemized recipe. Just presoak some long grained rice for ~20 min or so, drain. Add to a tbsp of oil in a heavy bottomed pan and toss around until the rice begins to brown slightly and acquires a puffy interesting look. At this point, add some finely diced onions, lots of cumin powder, salt and paprika to taste. Add some tomato puree/chopped tomatoes/sauce (in other words, whatever you can lay your hands on). This gives the rice a gorgeous pink color! Sprinkle in some pine nuts…this is a great idea! Then add hot water at the usual 2:1 ratio, cover and turn heat down. That’s it! I was crazy enough to put on my galoshes and stomp outside in the snow to scavenge around my herb garden. I only found some brave sprigs of rosemary which I harvested and threw into the rice before covering.

I wish I had taken pictures to share. Alas, we ate everything! I’ve attempted to link up to some representative pix, so that will have to do for now. Wish you were here!