“So, y’ came all the way to England to see a bunch o’ stones?” The good natured cabbie shook his head as he dropped us off at Tasburgh House, just outside the lovely Georgian town of Bath. This about summed up Day One of our English vacation. 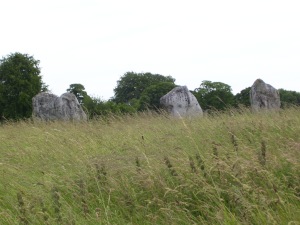 We had begun by seeking out the largest and the most atmospheric of the Megalithic stone circles, in Avebury to the east of Bath. Massive, rough-hewn rocks, dating back some 5,000 years, sprawl over a diameter of 1,400 ft.  Only about 27 remain, thanks to the religious zeal of 13th century villagers, who destroyed many of the stones out of superstition while others (the more practical minded, no doubt), pillaged them to build their homes.

Unlike the more famous Stonehenge which is cordoned off, you can wander between the stones here, wondering about the ceremonial rituals hosted on this ancient land. Charming legends mark some of the stones: the Swindon stone is reputed to walk across the path at midnight, searching for its lost brethren, whereas running anticlockwise 100 times around the Devils Chair can conjure up your secret wishes! The so-called Barber-Surgeon rock has a not-so-charming past..the intact skeleton of a man, presumed to be a medieval barber/surgeon by the tools found on his person, was buried under the stone apparently from an unfortunate accident. Alas, even after his remains were rescued in 1938, they were destroyed in the London bombings of WWII!

Dwarfed by the sarsen stones

By noon, we were on our way due south, stopping for lunch at the gorgeous cathedral town of Salisbury, before continuing on our pilgrimage to Stonehenge. Although described by many as underwhelming, I was still struck by a sense of awe at the sheer massiveness of the stones, made all the more obvious by the tight circumference of the circle.

Each stone was hauled at least 20 miles from the source, at Marlborough Downs, levered into position and engineered to hold the horizontal lintels ..a feat requiring manpower of hundreds or even thousands of men. Why? Was it an astronomical calendar, a sacred site for ancient rituals? According to 12th century legend, the magical Merlin had the “Giant’s Ring” moved from Ireland, named for the giants who originally carried them from Africa (!) to it’s present site on the Salisbury plain. There is plenty of magic and myth to go around.

Enduring stones against a blue sky

This entry was posted in Uncategorized. Bookmark the permalink.