The first reports of a strangely seductive aroma wafting over Manhattan, Queens and nearby New Jersey began in 2005. People smelled maple syrup, which got them fantasizing over pancakes and waffles. No doubt, the local Denny’s did brisk business. But there were enough calls to 311 to set the authorities sniffing. It was not until 2009, after the Department of Environmental Protection analyzed dozens of air samples and computed wind routes, that Mayor Bloomberg announced the mysterious source: a spice factory in New Jersey that processed fenugreek.

Sotolon, or more precisely 4,5-dimethyl-3-hydroxy-2[5H]-furanone, is an extremely strong aroma compound. In low concentrations, it smells like maple syrup, caramel or burnt sugar, and at high concentrations it evokes the smell of curry and spices. It is the major aroma and flavor component of fenugreek and lovage, but also flavors rum, white wine, aged sake and tobacco. Why you complain, New Yorkers?

Remarkably, fenugreek (Trigonella foenum-graecum) is used three ways: as a spice, herb and vegetable. The yellowish cuboid seeds (methi) are roasted and widely used in Indian cooking, the dried leaves (kasuri methi) are used as herb, and the fresh leaves (methi) are cooked as greens (as in my recipe for Alu Methi). This time, I chopped the leaves up finely in my food processor and incorporated them into a verdant and pliant dough, to make methi parathas, a flaky, flat bread full of flavor. 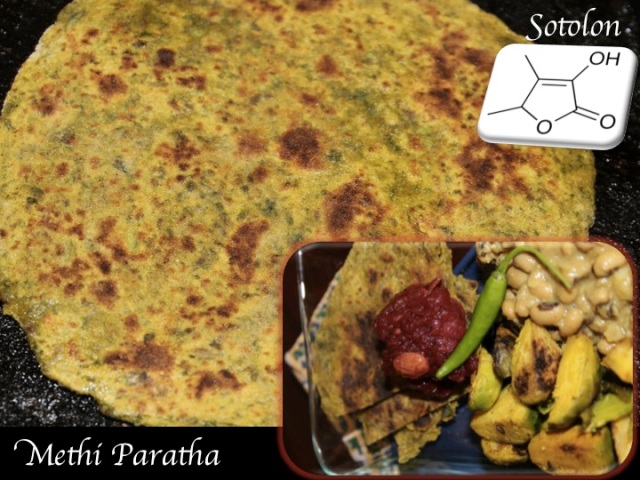 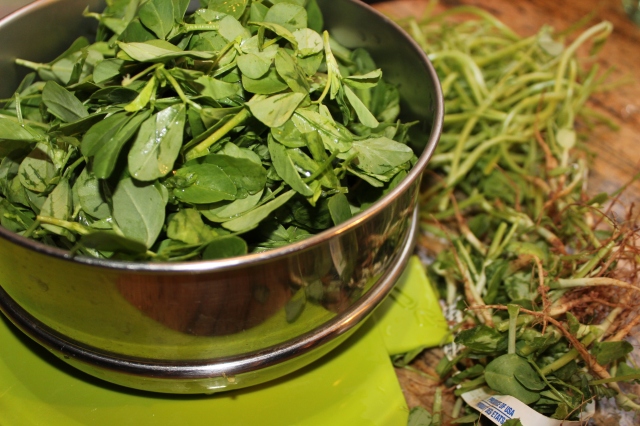 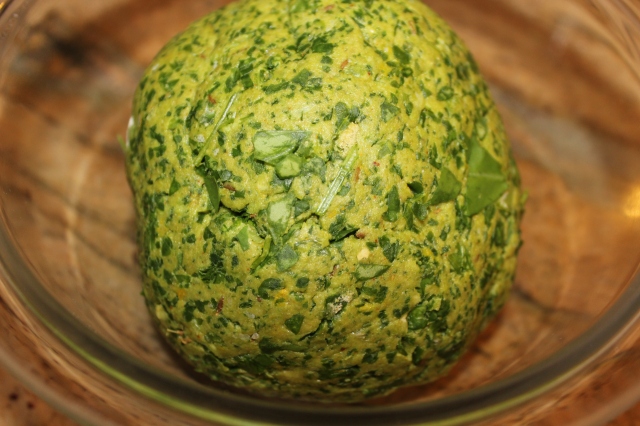 Make the dough with minced fenugreek, spices, whole wheat and chick pea flour. Let rest, covered, for half an hour. 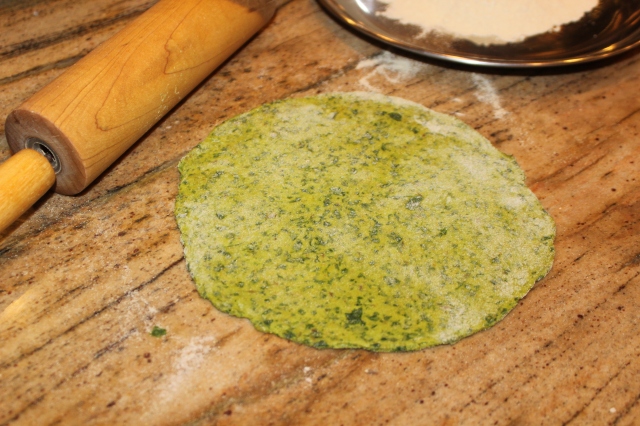 Roll out into a circle 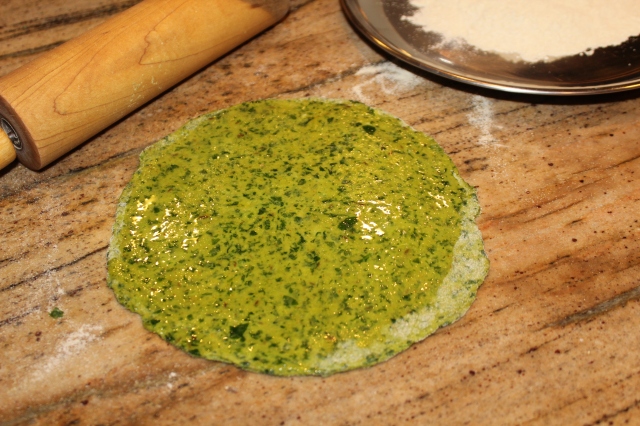 Spread a thin layer of oil on the surface 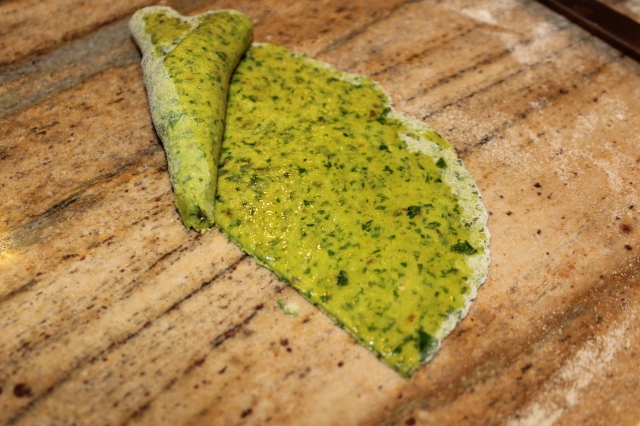 Make a cut to the center, then roll dough around the cut end to form a cone 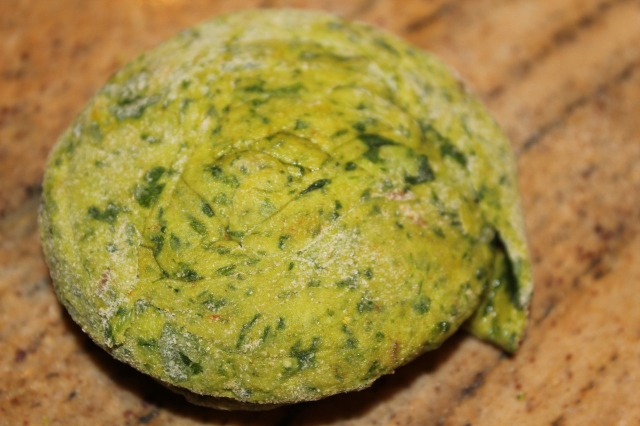 Flatten the cone into a circle, in the palm of your hand. Note the concentric layers in the dough. 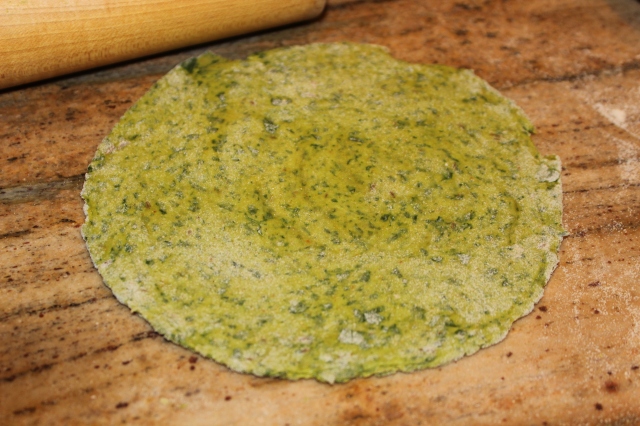 Roll out the dough again. This time, the circle has concentric layers that make the paratha flaky. 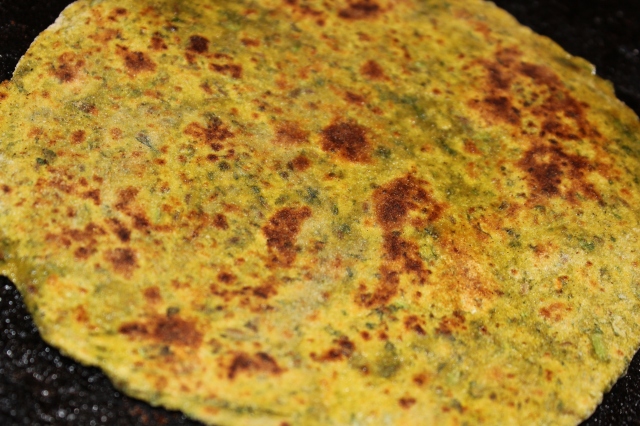 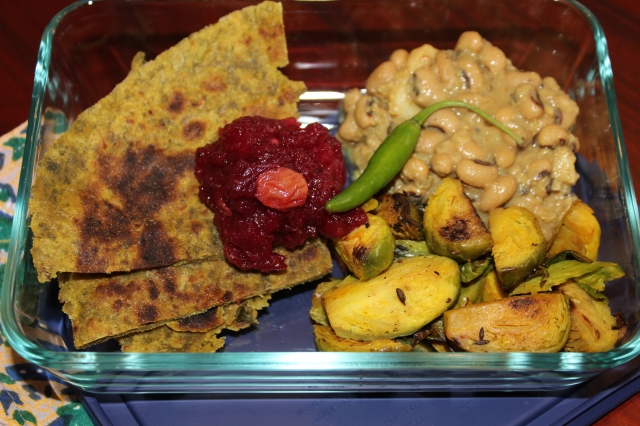 Leftovers are delicious packed for lunch! I served the methi paratha with black eyed peas, roasted wedges of brussels sprouts with cumin seeds, topped off with a cranberry raisin relish. The green chilli is to get my endorphins going.

We were too hungry to wait for any more photos, so I’m sharing the left overs with you. I hope you enjoyed my favorite furan. Until next time, I’ll leave you with a substitute for the cheery yellow flowers of fenugreek and a walk down memory lane. 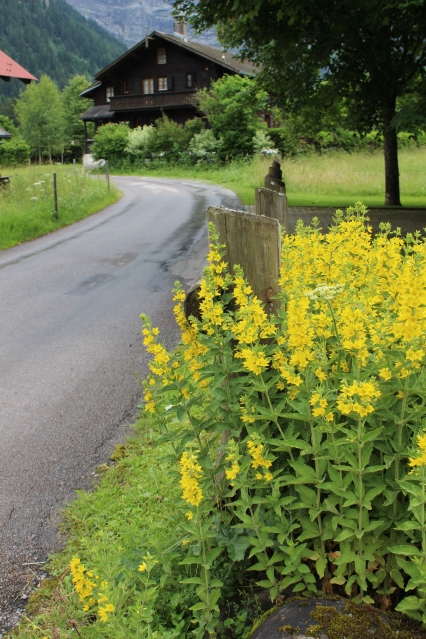 Path leading from my conference in the village of Les Diablerets, tucked away in the Swiss Alps (banner picture).

10 Responses to Fun With Furans: Making Flat Bread with Fenugreek