Posted on January 22, 2012 by madamescientist

“What’s in a name? That which we call a rose
By any other name would smell as sweet.”

Alas, despite being cloaked in a glossy purple, regal exterior, the eggplant belies Shakespeare’s adage by collapsing into a colorless, stringy amorphous mess when cooked. Little wonder that many blanch at the sight of limp, congealed offerings and never learn to appreciate the lusciously mild, creamy flesh that begs to be flavored with exotic spices.

A member of the nightshade family (Solanaceae), the seeds of an eggplant have a bitter taste, being loaded with nicotinic alkaloids as does its close relative tobacco. Folk wisdom dictates that “male” eggplants have fewer seeds than “female” eggplants. According to one source, “To sex an eggplant, look at the indentation at bottom.  If it’s deep and shaped like a dash, it’s a female.  If it’s shallow and round, it’s a male.”

Is the female of the species more bitter than the male? Left, "female"; right "male". Fromhttp://www.thesweetbeet.com/sex-and-the-eggplant/

That description gives a new meaning to the phrase “food porn”. I don’t know about you, but I’m a bit of a prude and hesitate to examine the private parts of my vegetables in full view of other grocery shoppers. Fortunately, my blushes were spared by a more authoritative horticultural explanation: Eggplants are fruits, enveloping the seed which in turn is born from the union of the male pollen and the female ovum.  Botanically speaking, a fruit is genderless. As one botanist put it succinctly, “Fruits are the product of sex and do not have it”. Having dispensed with that canard, it may be a better bet to look for younger specimens which tend to have a larger proportion of flesh to seed.

Which begs the question why do eggplants have noticeably distinct rear ends? I leave it up to you, dear reader, to solve that conundrum. But there is nothing mysterious about this simple and elegant creation that numbers among my favorites: an easy roasted eggplant accompaniment, Baingan bharta that tastes even better the next day spread over toasted bagels.

Start with a large eggplant, a medium sized onion and some tomatoes. You will also need garlic, ginger, a bunch of cilantro (coriander leaves) and fiery green chillies if you are woman (or man!) enough. 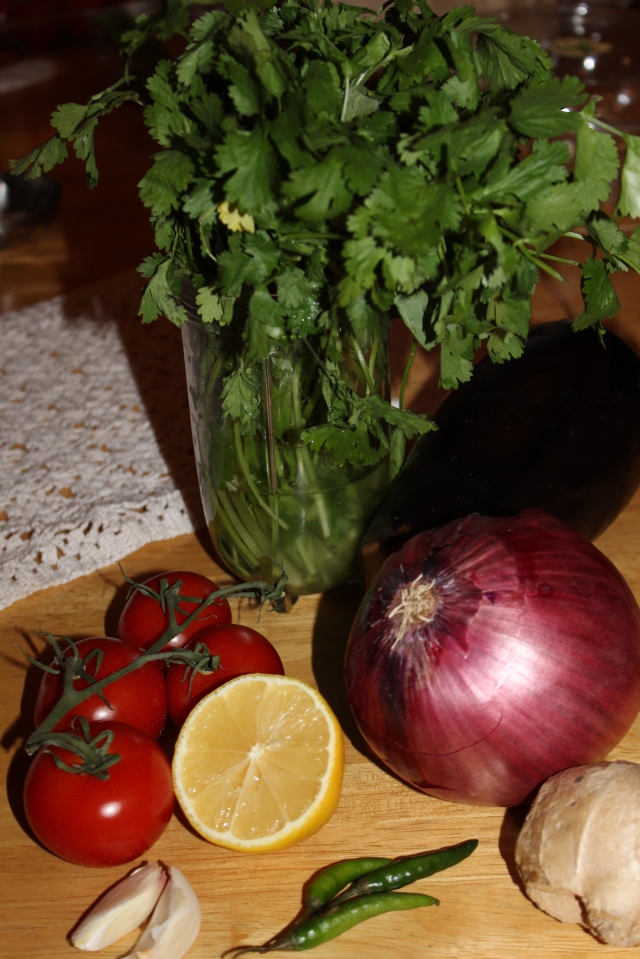 First, roast the eggplant under the broiler. Puncture it a few times so it does not explode, and place on a foil covered pan. It WILL get messy, that I promise. Broil until the skin is charred. Turn occasionally, without singeing your knuckles, if possible. Remove when blackened and burnt, and let cool. The flesh should have pulled away from the stiffened skin. If does not look soft enough, cover with a shallow pan or place in a paper bag. Scoop out the flesh, scraping it off the skin. If you get a few blackened pieces of skin, that’s fine..they add flavor.

Meanwhile, chop up the onions, couple cloves of garlic, piece of ginger and few green chillies. I use the food processor.

Heat a tablespoon or so of oil. Flavor the oil with some aromatic seeds: cumin and fennel. When the seeds sizzle, add the onion mixture. Saute over medium heat, until the mixture looks lightly browned.

Sizzling spices are so hot that they went out of focus!

Then add spices; clockwise from noon: red chilli powder, coriander-cumin powder mix (or separately, if you have them), turmeric and garam masala. Add salt to taste. Typically, I add a pinch of sugar. It seems to round out the flavors.

In the same processor, place the eggplant flesh and pulse it a few times. I think this step is key to the ultimate creamy texture of the dish, and does away completely with the stringy mess.

Add the lightly pureed roasted eggplant to the onion mixture. Time for the hard working processor to make quick work of the tomatoes before they join their delicious brethren in the pan. Sometimes, I add a few tablespoons of canned tomato puree instead..this adds an intense color and flavor. Finely chop a bunch of coriander leaves  by hand or machine.

Putting the baingan bharta all together 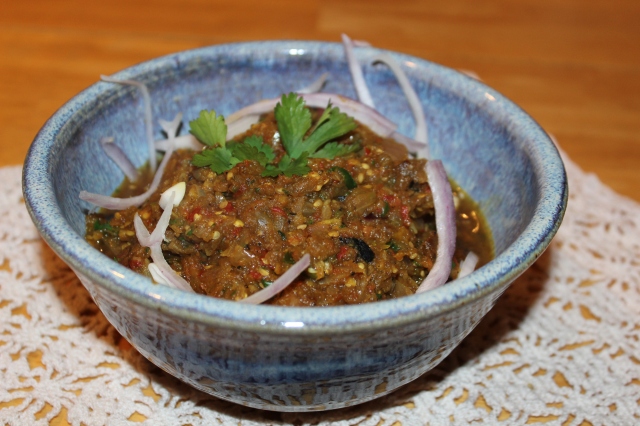 Note: The lace doily was made by my late aunt who taught me a host of now extinct lady-like virtues, including tatting and crochet.