A momentary lapse of reason

Posted on August 7, 2011 by madamescientist

Sometimes you have to channel your inner meanness. Yes, you heard right. Sometimes, it is tactically effective being sharply sarcastic and overtly grumpy so that people around you prudently retreat (to the movies, in this specific instance), thus giving you some much needed personal space and leaving you to wallow in peaceful, guilt-free virtuosity. Certainly, I do not advocate getting really mad. Anger is uncomfortable and should be avoided at all costs. But a judicious dose of faux fury can soothe the savage breast, leading to a speedy recovery to equanimity. Think of it as a safety valve on a pressure cooker, letting off genteel bursts of steam at intervals rather than exploding all over the kitchen ceiling. Those hisses and whistles may look scary, but believe me they are nothing like the real thing. So the next time you are exhorted by a well meaning Facebook status to “Smile!” go ahead and do the opposite. I say this with the confidence born of 26 years of marriage, two teenage kids and a crazy hard day job.

With my lovable but annoying family out of the way, I was able to (i) whiz through grocery shopping, (ii) spend a little something on myself (okay, it was just a jar of Pond’s cold cream from Walgreens), (iii) fold the laundry, and (iv) make dessert. I chose something sweet and sour (just like me).

Step 1. Gather all the ingredients*. You will need white flour, sugar (granulated and icing), eggs, lemons and butter. An electric mixer is helpful. 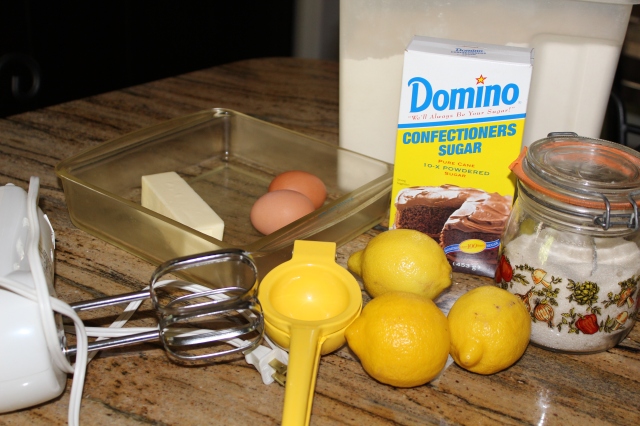 *There are two useful timesavers I learned from TV celebrity cook Rachel Ray. First, bring all ingredients to the counter before you begin (no, you don’t have to precariously juggle everything in one trip because you are not entertaining TV viewers who hope and pray for a spectacular crash). The other is to have a ‘garbage bowl’ close by, into which you drop your peels and shells so you can make only one trip to the kitchen trash bin (no, it does not have to be an enormously heavy earthenware pot unless you have Ray’s impressive forearms). I also picked up a smattering of lexicographically obscure words such as “EVOO”, “sammy” and “stoup” which I find difficult to insert into polite conversation.

Then beat in 1 cup white flour and a pinch of salt. Gather the soft mass together and press into the base of a buttered 8”x8” pan. You can use a smaller loaf pan and get a thicker crust. Bake at 350°F for ~20 min or until edges are the palest brown. Remove, and let cool.

Step 3. Meanwhile, make the filling. Using the same bowl and mixer blades (if you dumped it in the sink, fish it out now. If you washed it already, oh well, serves you right for being so efficient): beat 1 cup granulated (ordinary) sugar with 2 eggs. Add juice and zest of 2 lemons. Or three. It is so good. Finally add in 2 tbs of flour. 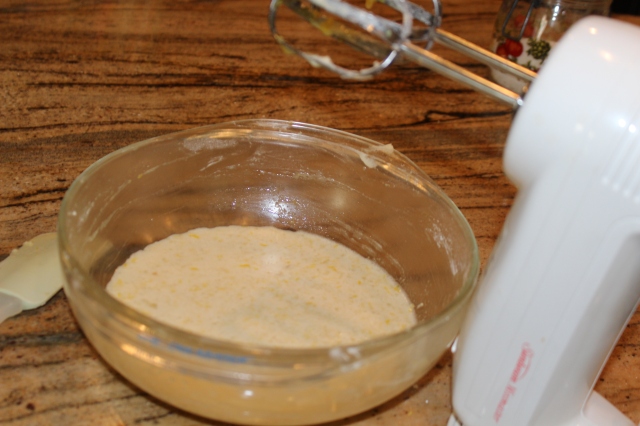 Step 4. Pour the filling (it will be runny) into the prepared crust and bake for another 20 min. until the filling is set. When cool, cut into squares or rectangles. Shake some confectioner’s sugar on top. I used my tea strainer for this.

Your three hours are up. The door bell rings to reveal a suitably chastened and hopefully sanguine collection of linked genotypes and phenotypes. (Did I forget to mention the cause of my ire? They lollygagged away at their respective computer/video game/miserable Russian fiction instead of helping with chores). Smile and feed them luscious lemon bars (before dinner).

Try it and let me know if it works (both the strategy and recipe)!

6 Responses to A momentary lapse of reason