Red, White and Grape: From Jumping Genes to Wrapping Leaves for Dolma

Posted on February 20, 2016 by madamescientist 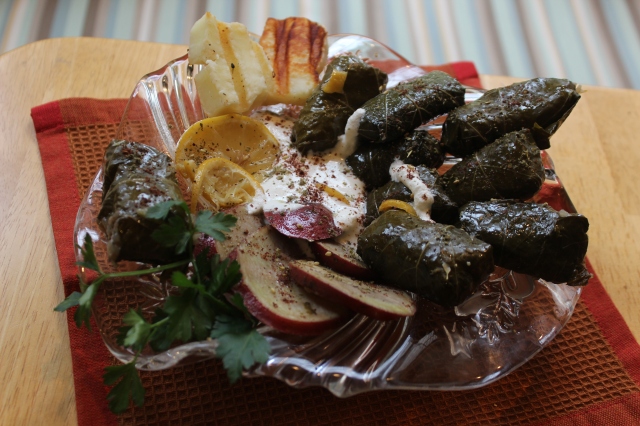 Even King Tutankhamun (1332-1322 B.C.) prudently stashed away amphorae of both red and white wines to enjoy in the afterlife. Biochemically, a single class of pigments found in grape skin, the anthocyanins, separates the red from white. White grapes arose from their wild, dark berried ancestors by not one, but two rare and independent genetic events: either one alone would not have given us the white grape. In fact, all ~3000 white cultivars today carry these same gene disruptions, pointing back to a common ancestor that arose millennia ago. The disrupted genes code for transcription factors, aka master regulators of biochemical pathways that can turn other genes on or off.

Science sleuths have peeked back into the gene history of Vitis vinifera to figure this out.

First, the MybA gene duplicated, giving two side-by-side copies, both active in making anthocyanins and red berries. Somewhere along the way, one of them, the MybA2 gene accumulated two mutations (depicted as stars) that rendered the resulting protein non-functional.

Independently, a “jumping gene” or retrotransposon, (green triangle) landed within the adjacent backup gene MybA1, knocking it out as well. The resulting plant, termed heterozygous, still bore red berries, because the unmutated genes on the other chromosome were active. Eventually, two heterozygous plants bred together and some offspring received both chromosomes with two nonfunctional MybA genes.

If you’ve ever snacked on delicious dolmas, then you know that the goodness of the grape vine goes beyond berries. Legend has it that the gods of Mount Olympus feasted on the tender leaves of the grape wrapped around morsels of rice or meat, alongside ambrosia and nectar! Although stuffed grape leaves are common around the Mediterranean, Greeks claim that dolmades were co-opted by the army of Alexander the Great to parcel out limited rations of meat during the seige of Thebes.  Luckily, you only need to lay seige on your local Middle Eastern grocery store to find jarred leaves, preserved in brine. Unfurl them gently and give them a good wash to get started. It doesn’t hurt to have a glass of your favorite vintage, red or white, on hand before embarking on this project! 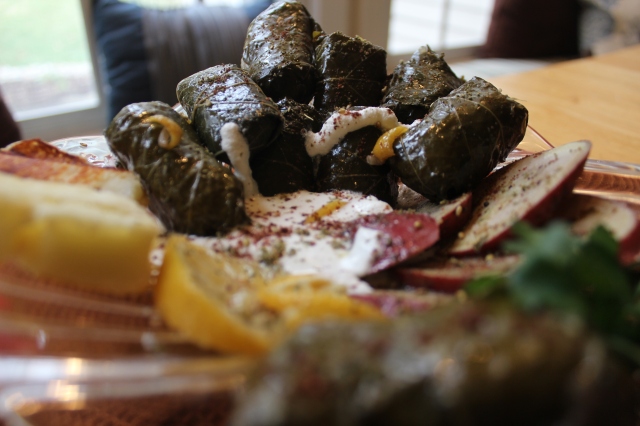 We start with the stuffing: by now you know that I am an obligate vegetarian (although sorely tempted toward venison when the deer enroach on my lilies), so I opted for a rice filling. In a tablespoon of olive oil, saute a cup of chopped onions until translucent. Add a clove or two of minced garlic, a cup of diced tomatoes and a cup of rinsed rice (any kind will do). That’s it, turn off the heat. Now season the mix: salt and pepper, of course. A cup of chopped parsley. A teaspoon of ground cumin. Some cayenne or smoked paprika, if you like it (love!). A handful of pine nuts or chopped walnuts for texture. A handful of raisins or currants for an unexpected burst of sweetness. A tablespoon of pomegranate molasses (or substitute a good squeeze of lemon). Recipes and variations abound! 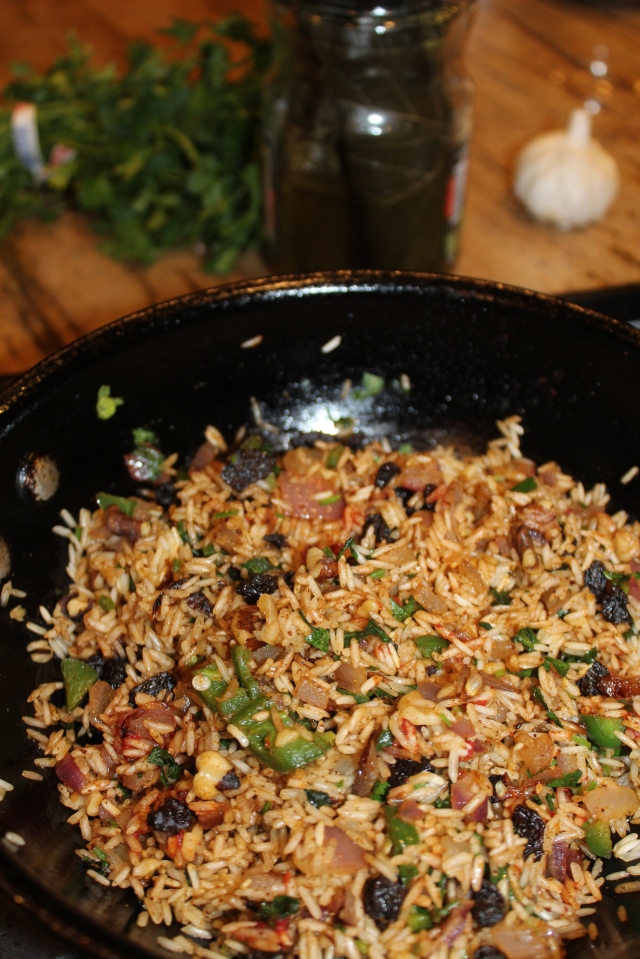 Rice stuffing for dolmas: savory with a touch of sweetness, a bite of nuts and the tang of pomegranate molasses.

Let cool while you chill with the wine. This last step is important because you will need to be patiently mellow for the next step.

Working on a clean counter with a big platter (and glass of wine) close at hand, begin by laying a grape leaf vein side up. Add a teaspoon of rice stuffing to the leaf center, just off the base. Yes, only one teaspoon. I find it easy to first press it into an oblong in the palm of my hand. Follow the directions on any YouTube video to fold in the leaf, first the bottom lobes, then the sides, and finally into a neat little cigar. Mine are not so neat, but I blame the wine. Repeat n-times, until (i) the stuffing or (ii) your patience is used up. Pile the parcels on the platter, seam side down as you go along. 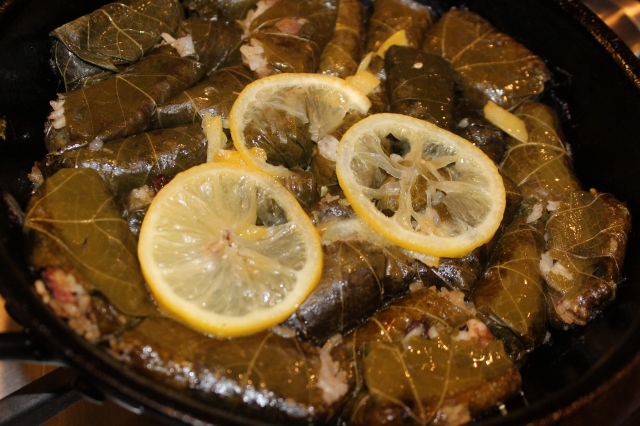 Do not worry if some of the stuffing busts out before or after cooking. These are the ones that get eaten first!

Bring 3 cups of water to boil. Lubricate a heavy bottomed pot with a swirl of olive oil, and arrange a layer of sliced potatoes on it. These protect the dolmas from sticking to the bottom. You can also line with grape leaves, but the sliced potatoes make for a tasty garnish when done. Next, arrange the stuffed grape leaves in layers. Top with slices of lemon. Finally, add the juice of one lemon and a tablespoon of olive oil to the hot water. Pour it into the pot until it is level with the top layer of dolmas. The amount of water is not critical, as it will eventually get absorbed into the dolmas. Hold the dolmas in place with a heat proof plate and weigh it down with something heavy. Let simmer away for a good hour or so. Cool completely, as dolmas are best served at room temperature. This can be made a day ahead and stashed in the refrigerator to allow the flavors to meld. 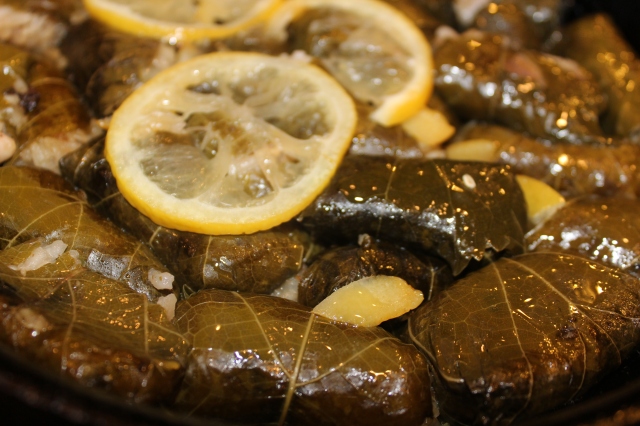 I served the dolmas with dollops of Lebanese yogurt or labneh, sprinkled with za’atar and a side of grilled halloumi cheese. Rescue the sliced potatoes and lemons- they taste great too! 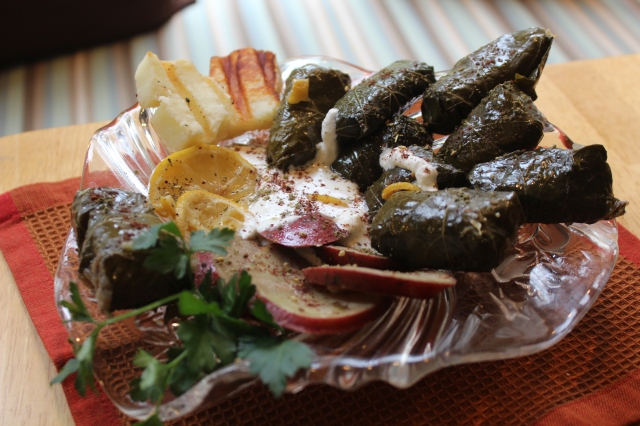 Although I don’t grow grape vines in my Maryland backyard, here are some red fall berries from the heavenly bamboo Nandina, as an ode to the anthocyanins.

2 Responses to Red, White and Grape: From Jumping Genes to Wrapping Leaves for Dolma